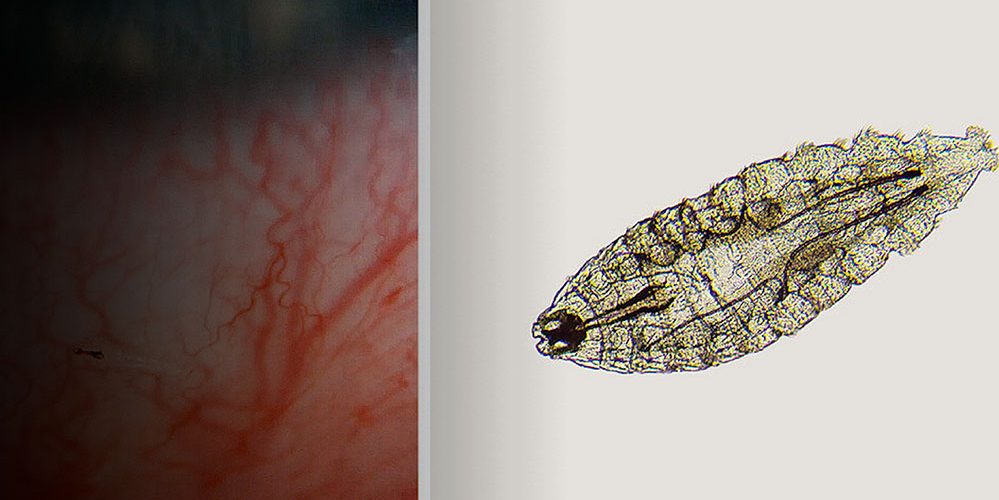 A 53-year-old man went to a French emergency room complaining of a persistently itchy eye. He told his medical team that earlier that day while gardening, he had “felt something enter his right eye.”

Upon examination, doctors at the University Hospital of Saint-Etienne in Saint-Priest-en-Jarez, France found more than dozen squirming larvae in his eye. Incredibly, the man still had 20/20 vision.

Ophthalmomyiasis is a term used to describe an infestation of the eye by fly larvae. The infestation had caused dilated blood vessels, a condition known as conjunctival hyperemia.

The team has published a paper describing their diagnosis and treatment of the case. The doctors removed the larvae one by one using tiny tweezers and prescribed a round of antibiotics to prevent infection. Ten days later, on follow-up, he was found not to have suffered from any eye damage or infections.

Sheep bot flies are common in France. they lay eggs in the nostrils of sheep. Once deposited, the larvae wiggle their way to the sinuses, where they stay, feeding on mucus and developing into maggots. then drop out of the nose onto the ground, where they mature into adult flies. Sometimes the female flies become confused and lay their eggs on the eyeballs of unsuspecting humans.

Conventionally in physical diseases like infection, the doctor prescribes blood tests for the diagnosis of the disease and provides a guide for prescribing the right treatment. however, for mental illness diagnosis and...

Research from the Babraham Institute has developed a new technique for rejuvenating skin cells. This technique has allowed researchers to rewind the cellular biological clock by around 30 years according to molecular...